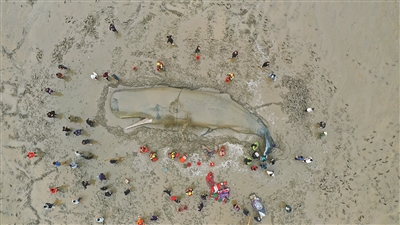 ¡¡¡¡The sperm whale stranded on the beach. [Photo by Xu Neng]

¡¡¡¡On April 19^th, a sperm whale stranded on the coast of Xiangshan touched the hearts of countless people. After a 21-hour rescue operation, the sperm whale successfully returned to the deep sea.

¡¡¡¡Rescuers called the mission "an unforgettable experience". "We watched the whale swim back into the depths of the sea in the light of dawn. May it never show up again—because that means it's safe and sound in its ocean home! "

¡¡¡¡At 8 AM on April 19^th, on a stretch of sea shore near Xiangshan's Shipu Science and Technology Park, fishermen found a stranded male sperm whale, measuring nearly 20 meters in length and weighing about 70 tons.

¡¡¡¡After receiving the news, local officials and rescue vessels arrived on the scene immediately. However, due to its large size and the shallowness of the water, the whale could not swim back into deeper waters, even when being towed.

¡¡¡¡As the tide ebbed, rescue became even more difficult. The whale was stuck on the tidal flat, and there were visible abrasions on its tail and head. Due to the lack of moisture, its skin was peeling. Its tail quivered feebly. The only thing rescuers and fishermen could do was continuously douse the whale with buckets of water and wait for the high tide. They also cleaned and administered medication to its skin wounds.

¡¡¡¡"When in the sea, the buoyancy of the water can support the weight of the whale's body evenly. But when stranded on land, the whale's muscles will press on its internal organs and eventually cause its death," said Wang Liangliang, a staff member of the Ningbo Yuren Aquatic Wildlife Rescue Center and one of the rescuers. "We carried out a whole-body examination on the whale and took samples from it. We also tied a buoy to its body so that it could swim away more easily when the tide rises."

¡¡¡¡At 9:30 PM, as the tide rose, the whale started to float in the water, swaying its tail every now and then. Rescuers began to feel more hopeful. "We used three ships sailing side by side to tow the whale. To avoid the risk of towing too hard and causing additional injury, we sailed slowly at a speed of two nautical miles per hour and stopped every once in a while to check on the whale. It was very cooperative throughout the whole process, occasionally turning on its side and spraying, adjusting its body to the journey," said Ni Jianquan, deputy director of the Xiangshan County Water Conservancy and Fisheries Bureau.

¡¡¡¡As a golden dawn broke at 5:30 AM of the 20^th, the whale was released in 28-meter-deep waters near Xiangshan's Nanjiushan Island, over 20 hours after being discovered. The rescuers severed the cords connecting the animal to the towing vessels, allowing it to dive freely into the safety of the deep sea. Before disappearing, the whale resurfaced several times, spraying and waving its tail, as if saying farewell to the rescuers on board.

¡¡¡¡It has been several days since the stranded sperm whale was returned to the sea. The story of the successful rescue touched the hearts of countless people. Everyone hopes that the sperm whale could go on to live a safe and carefree life in the sea and never come back near the shore again.

¡¡¡¡How is the sperm whale doing now? Has there been any unusual occurrences in the last few days? The Xiangshan fishery department has been monitoring its surrounding seas continuously and encouraging fishing vessels to remain on the lookout for signs of the whale. As of now, the whale has not been spotted since the day of the rescue; no unusual signs have been observed in Xiangshan's seas.

¡¡¡¡Zhai Hongchang, a senior engineer at the Second Institute of Oceanography of China's Ministry of Natural Resources, said that sperm whales are deep-sea animals that are not meant to linger in the shallows for long. If there are no sightings in ten to fourteen days, it can be concluded the whale has left the area for the open sea, where it truly belongs.

¡¡¡¡No one can say whether the whale has returned to its habitat in the depths, or whether it is still alive and healthy. However, for the time being, the calm sea seems to be the best answer, and no news may be the best news...

¡¡¡¡Professor Zhao Shenglong of Zhejiang Ocean University is an expert in marine biology. He told our correspondent, "In recent years, there have been many whale strandings along the coast of Zhejiang. This stranding probably happened because the whale was injured or about to reach the end of its life. It might have been too weak to remain in the open sea and got washed ashore by the tides."

¡¡¡¡Wang Liangliang proposed another possibility: disorientation. In waters busy with human activity, whales' navigation senses may be disrupted by the dense electronic signals around them.

¡¡¡¡Chen Lu, a citizen of Shipu who lives near the whale stranding site, told our correspondent that according to the elders in her family, another whale got stranded in the town more than 20 years ago. It was much smaller and was also rescued successfully. "I hope this whale stays safe, just like the one before."